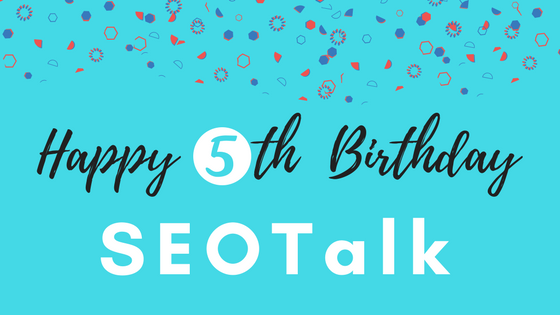 Happy Birthday to us. And us means the entire community because without you all, we would not have reached so far.

It was over 5 years back that I was in conversation with Jaydip Parikh, the founder and Chief Everything Officer of TejSolPro, on Facebook over some SEO stuff. And we dived deep into that conversation.

One thing led to another and few private conversations later, we decided to co-host this Twitter Chat.

Most of the times, being developers, we left out the SEO part or just did the basics of having a Title, Description, Keywords and few other meta tags.

Over the years, the SEO industry had matured and we had subject matter experts who lived and breathed all things SEO. My work really didn’t demand to learn more than basics. But as the online marketing world around me started developing too, I was getting inquiries about site optimisation. That’s where I started learning a little more than basics.

But unlike the programming universe, the SEO industry didn’t have any community around during that time. It was quite a big industry whitespace and many of the folks really worked on hearsay.

The other side of the coin was, 5 years back I was all enamored by Twitter Chat and its immense potential in creating engagement around certain subjects. Also, there were NO India based Twitter Chat during that time. Most of the chats I was part of were hosted by my friends in the US region and they were doing them brilliantly.

So, while I wanted to have a Twitter Chat of my own, I didn’t want to replicate the same themes.

Thus came SEOTalk, which had its own niche and geography.

5 Years is a long time

And they were not easy. There have been times where we hardly had any participation and then there were times when we had over 300 tweets in one hour and it started trending organically across the country.

Also, there have been times when I was clueless on the topic for the chat and pick one up from questions in Quora or similar websites.

The tough part though is coming up with questions and keep engaging the crowd through those 60 minutes. Any Twitter Chat host will agree that this part is never easy.

But we learned and we will keep learning!!

We have some crazy ideas up the sleeve for next year.

The first is to go beyond our Facebook Group and have the community have its own place. So we are going to announce the launch of a forum website theseotalkers.in soon.

The second one is to have offline meetups. We want to have some of our online conversations to spill over into the offline meetups and gradually into an event/workshop of its own.

And finally, a new timing!! This had been requested for a while and we heard you. Starting this week, we plan to host #SEOTalk Twitter Chat at 9:30PM India Time, 4PM GMT.

Have you been part of SEOTalk Twitter Chat? Do let us know your experience so far.

How can we make it better? Because it will benefit all of us.

Bouquet & brickbats, all are welcome!!