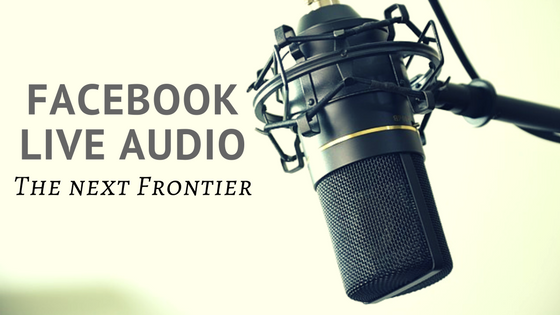 Facebook is slowly rolling out the Live Audio feature as part of it’s live streaming services.

The feature was announced last year in December and Facebook had started testing with some leading partners like BBC and Harper Collins.

With the public launch, they are yet again trying to disrupt the audio streaming space.

Over last few months, we have seen Facebook doubling down on streaming content – they are ranking videos, especially Facebook Live videos higher on the platform, thus pushing users to produce more of video content. 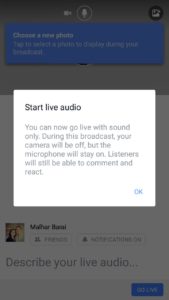 But with Facebook Live Audio, they are taking the competition beyond Periscope and the likes. Now they could become another platform to consume audio content competing with the likes of Soundcloud.

The launch has definitely opened up new possibilities and should challenge the existing players in the space.

We know that sometimes publishers want to tell a story on Facebook with words and not video. We’ve even seen some Pages find creative ways to go live and reach audiences with audio only by using the Facebook Live API or by adding a still image to accompany their audio broadcast. Our new Live Audio option makes it easy to go live with audio only when that’s the broadcaster’s preferred format.

We also know that publishers sometimes go live from areas that lack strong network connectivity. Though we alert the broadcaster if their signal is low, Live Audio presents another option for connecting with audiences in real time from low-connectivity areas

In a nutshell, they killed two birds with a single stone –

In my opinion, Facebook Live Audio opens up an entire new frontier for podcasters, small-time music broadcasters, breaking news kind of content. Now they have a new platform, a platform which is highly popular and engaged, thus giving them a better reach.

From consumers perspective, they eliminate the need to download one more app since Live Audio will be native to the original Facebook app. Thus making it easy from them to consume the content.

What are your thoughts? Will it really be a challenge to existing players?